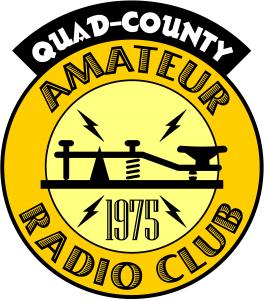 HAPPY BIRTHDAY QCARC! On April 18, 1975, a group of about 30 local hams gathered at the DuBois High School for the first meeting of what would become The Quad-County Amateur Radio Club. From that auspicious beginning, the club grew in membership and activity. The members of the new club took part in Field Day that very first year from a hilltop in Clear Run. Later, the club placed the WR3AGV repeater at that location, coordinated on 146.13/73 MHz.

Traditions that continue to this day are monthly meetings at 7:30 pm on the third Friday of each month, Club Banquets, Field Day, and a number of Public Service activities, involving multiple served agencies, such as DuBois and Sandy Township Police Departments, the Red Cross, the Boy Scouts, and local schools. Club Founder, Joe Shupienis W3BC (then WA3IHK) conducted dozens of licensing and upgrade classes that continue to this day, in DuBois, Clearfield, St. Marys, Ridgway, Kersey, Punxsutawney and Reynoldsville.

In the 1970s, the club held meetings in several communities throughout the Quad-County Area, such as Sinnemahoning, Punxsutawney and Reynoldsville, but found that it was more convenient to keep the meetings in the more centrally-located DuBois area. In 1991, meetings moved to Clearfield at the County offices, and over the next couple decades the membership, meeting participation and activities declined, as the club became "the Clearfield Club. New clubs formed in Jefferson, Cameron and Elk counties in reaction to the long travel distances the move created. 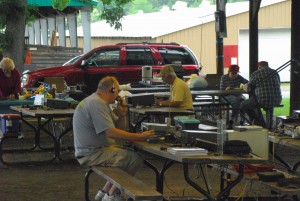 In 2011, the club decided to conduct Field Day operations in a location accessible to the general Public, and moved operations from a small room in the Clearfield County Emergency Operations Center to a public pavilion at the Clearfield County Fairgrounds. In November, the Club held its final meeting at the EOC, and began holding meetings in DuBois. Currently, we hold our monthly meetings at the Penn State DuBois Campus, which provides plenty of free parking, and outside space for experimenting with antennas and hidden transmitter hunting before the meetings. 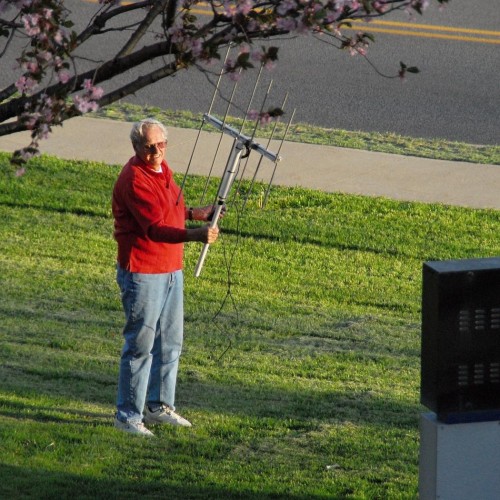 Don KB3LES shows us how happy he was to find the fox!